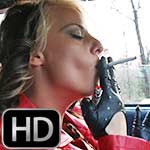 She gets in, get her outfit adjusted and goes to start the car but it won’t start. She tries for a bit, cranking and bouncing away until she decides to give the car a break for a moment. That’s a good time for her to grab her smokes from the glove box. She grabs a cigarette, cracks the window and lights it up. She then tries starting the car again and after some effort, gets it started. She revs it to clear it out and she thinks she’s good-to-go…yeah, not! The car stalls on her and she bounces a lot while trying hard to get it restarted again. When she gets it going again, she gives it a few more revs and drives off, hoping the car will stay running.
“Ready to go for another joyride?” she asks as she pulls on to the road. She has some fun driving you around. She teases you by pumping the pedal to make the car lurch, rubbing her gloved hands over her boots and flooring it to make the old, wore-out exhaust noisy as she drives these old, windy roads.
She’s wearing a red leather jacket, a leopard print dress, black leather driving gloves and red leather thigh high boots…bad girls do bad things!