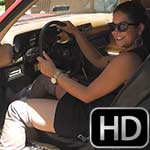 Brianna Starts Up & Revs the Camaro in OTK Boots

She tells her friend ‘Bye’ and gets in her to leave.  It takes a few tries to get the old Camaro started and when it is finally running, she revs it up for a few minutes to get it all warmed up so it won’t stall on her.