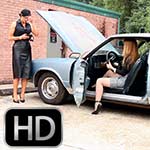 Britney & Cassandra Stranded at Work in Heels in the Monte

The video fades in with the hood up, Cassandra by the car and Britney trying to get it started with the door open. Looks like some girls are a bit stranded at the office. Britney is getting visibly frustrated at the car not starting while Cassandra keeps looking under the hood but isn’t sure what to do. After a while of unsuccessful attempts, Britney gives up the captain’s chair to let Cassandra give it a try. The battery sounds weak, so Cassandra may not have much of a chance to get it running. She eventually kills the battery…time to find some help elsewhere.