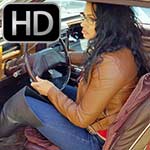 Jane Domino changes out the battery in the Cadillac since Diana drained it trying to get it started in previous clips. A new battery means a new girl gets to try to start it. Britney gets in to see if she can have any better luck with it. She’s wearing a brown leather jacket, really tight jeans and black leather stiletto boots. She cranks the engine over …and over…and over…aaannd nothing! But I think the problem is that she’s listening to Diana give her some instructions when Diana is the one who killed the battery in the first place. After a while, Diana wants to try it again. Britney slides over to the passenger side and Diana gets behind the wheel again. She’s wearing black thigh high cowgirl boots over jeans. She tries to get the car started and after some work she does get it fired up.
Now that the Cadillac is running we cut to Jane in the old Volvo. She’s filming her white sneakers on the pedals. The Volvo starts right up and she revs it up till the video ends.