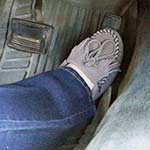 Cassandra Drives the Monte & Cranks the Volvo in Gray Loafers

Heading over to use the Volvo for a custom, she drives the Monte Carlo in these gray loafers and jeans. The last minute and a half are of her trying to get the Volvo started.