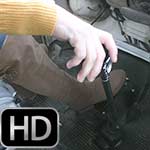 So it’s Cassandra’s turn and she has some issues starting off in first during her time behind the wheel.  She’s the kind of gal who is ‘all go’ when it comes to taking off.  Easing off the clutch is for sissies!  She stalls it a good bit and more than a few times she has trouble getting it going again.  She does, eventually, make it back to the house and the driving adventure with the 3 ladies comes to an end.

2 thoughts on “Cassandra, Elizabeth & Scarlet Pedal Pumping the Bus, 4 of 4”