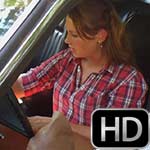 She’s got this super sexy outfit on and wants to go start up the Coronet and take it for a spin with you riding along!  It takes her a while to get it started up and out of the driveway.  It’s hot out and the sweat is starting to show and she can’t wait to get some speed up so the wind can cool her off!  She drives around through town, hits some traffic at stop lights and tries to floor it as often as possible.  Her itty-bitty shorts give you a great view of her killer legs as she works the pedals!