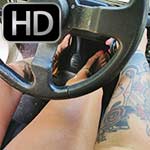 Diana cranks the Renault till it starts, pumping the gas using her full leg. Her sexy pink toenail polish, tanned feet and gold flat thong sandals contrast nicely against the black carpeted floorboard of the car. Once the car starts, she gives it a few romps of the gas and then navigates out of driveway and heads down the street to give the little Renault some driving to stretch it’s legs. She gets to the end of the road and stalls the car when turning it around. It floods easily, so it takes some work to get it started again. Good thing it’s a dead-end street because she was in the middle of the road.

One thought on “Dirty Diana Pink Polish Pumping the Renault”