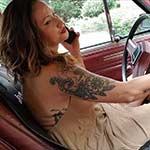 “Momma’s car is not starting, I’ve got to change out the battery. I’m going to be there, don’t worry sweetheart.” Jane says to her little man over the phone. She’s running behind to pick him up because her old Jeep won’t start. She gets the battery changed and changes it while wearing heels, on the phone with her kid and not breaking a sweat…that’s skill!
She gets in the Jeep, hikes her dress up to help get some airflow because it’s hot out! She’s pumping the gas in these shiny beige open toe slides with a big pink bow on them. The Jeep is cranking over strong and sputtering but it’s still not starting. She’s getting sweaty and starting to lose her patience. She calls her husband to see if he can pick up their son but it’s going to be a while for him to get there. Her frustration with her Jeep not starting and being late to pick up her son is just too much for her. She grabs her things to go inside.