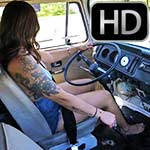 Jane Domino Driving the Bus in a Bikini & Barefooted

Gotta take the old Bus to the shop to get some more love. She’s got this blue and white bikini on with some denim cutoff shorts and no feet.