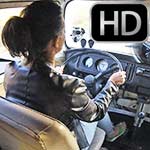 Jane Domino Enjoying the Day & the Bus in Flip-Flops & Barefoot

The video starts out with Jane warming up the bus engine wearing a leather jacket, jeans and white/green platform flip-flops. After it’s warmed up she hit’s the road, driving around and enjoying the day. She keeps the rpm’s high while driving and isn’t being easy on it. When she gets to a big, empty parking lot, she stops and takes her flip-flops off to have a little revving fun with just her bare feet. Once she’s had her fill of revving, she drives back home, keeping the rpm’s high again. She pulls into the driveway and has another hard revving session before quitting.