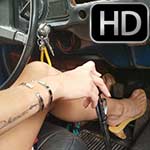 Jane Domino Struggling to Keep the Bug Running, 2 of 2

*This clip is same as previous but without picture-in-picture.*

Jane is wearing this sexy floral dress with a high slit and wooden sandals to go for a drive in the 1972 Super Beetle. She gets it fired up, gives it a few revs and goes to back it up but stalls it. Oops. She gets it fired up again and this time, gives it some more rpm’s to back up and all is going well until she let’s off the gas and it stalls.
“Really?” she says, annoyed. She fires it back up and this time, she takes the rpm’s to max to finish backing up…that should teach it a lesson. Except it’s running rough when tries going forward and she is pumping the gas to keep it from stalling but no luck. It’s acting like it has no power, so she just has to man handle it.

As she’s coasting down the driveway, it stalls on her again. She takes her shoes off because, you know, the car might respond better to her bare feet. She fires it up again and does a ‘stupid check’ to make sure she’s not overlooking anything.
“I have gas.” she says as she’s looking at the gauges.
“What is the deal?!?!” she says before giving up and decides to take the car back to park it and drive something else. She has to reverse up the long driveway and has to work hard to keep it from dying by pumping the gas a lot when it wants to stall. When she gets the car parked she gives it some hard revs for being a bad car.

2 thoughts on “Jane Domino Struggling to Keep the Bug Running, 2 of 2”