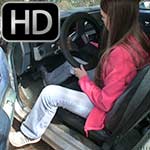 Typical day starting the Monte Carlo but she pumps it into submission and gives it some good, old fashion hard revving to warm it up.  Smoke blows out of the exhaust at first but gets less with each rev.  She hits the road and pushes that pedal down with her well-worn sneakers, flooring it here and there.!

One thought on “Kristen Starts & Drives the Monte in Jeans & Sneakers”