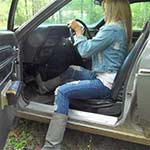 You’re hanging out before leaving to make sure Riley can get her husband’s old car started. She has to keep it running while he’s out-of-town. She’s going to take it to town but only if it starts. You stand by the open drivers door as she tries getting it started. She looks at you and says she might of flooded it when it doesn’t start after a handful of tries. She gets the car to sputter some and it’s wanting to run, she just has to give it enough gas without flooding it. You move over to the passenger side and have a seat since this might take a bit.

One Response to Riley Starting Hubby’s Old Coronet in Gray Boots, 1 of 2