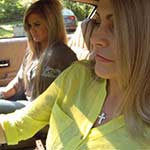 Riley Can’t Start the Camaro & Gets Help From Sugarmomma

Riley can’t seem to get the car started.  The Camaro can be finicky at times and this must be one of them.  She’s been trying for a short while to get it cranked in her thong flat sandals and after finally admitting defeat, she calls her mom for help.  Sugarmomma gives it a try but isn’t having much luck at first but does get the car to sputter and almost start.  Riley wants back in the drivers seat and she gets it started and revs it up to clear it out!