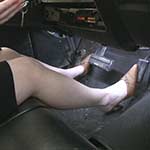 Scarlet suspects you keep doing stuff to her car to keep it from starting.  She’s pissed because she’s ready to go but apparently you’ve messed with her car again and she can’t get it started.  She ends up killing the battery and tells you to find your own ride!