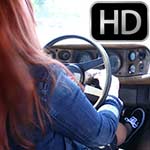 We watch from an outside view, Scarlet climbs into the old Camaro to leave the store but it’s not wanting to start.  You can see her bouncing in the seat as she’s working gas pedal.  We then swap to an over-the-shoulder shot of her struggling, here, you can see her Vans sneakers and pantyhose nicely on the pedals.  She keeps at it as we see a few more angles but does she get it running?

One thought on “Scarlet Cranking the Camaro – #610”