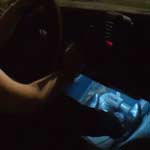 So these two ladies decided to go out for girls night and they took along the camera.  They’re leaving the restaurant and walking to the Monte Carlo to head home.  As typical with the old chariot, the car doesn’t start up right away.  Scarlet is behind the wheel and is trying her best to get it started but you can tell by the sputtering and ‘almost’ starting that it’s really flooded!  After trying to get the old car started for a few minutes, you suddenly hear a bystander come up and give Scarlet some tips on how to get the car started.  Scarlet laughs but it’s her ‘slightly embarrassed’ laugh.  She gets the car started, thanks to his coaching and the girls head home.

One thought on “Scarlet & Cassandra Leaving Dinner ‘Girls Night Out’”