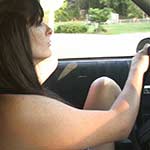 She’s gotta run to the store right quick.  She hops into the Monte Carlo and after a few tries to get the car started, it fires up and she heads out.  She’s driving in some flip flops but she kicks her left flip flop off and props her foot up on the seat.  She likes driving this way best.  We watch her cute little toes stretch at times to push the gas pedal.  She even pops the car into neutral a time or two and revs as she’s coasting.