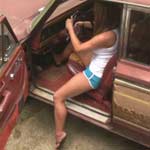 Tinsley Taking the Jeep to the Store in Gym Shorts

She’s gonna run to the store and the Jeep is closest and quickest to get out of the driveway, so she’s taking it.  Right before she hops in, she asks if you’ve taken it recently because if not, it might not start.  She sits in, leaving her left leg out as she just wants to see if it’ll start before getting all situated.  She spins it over a bunch of times and it looks like it ain’t starting.  She keeps trying and ends up killing the battery, so she gets out and decides to take your car instead.