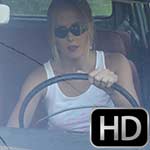 After having a bit too much to drink, Vika is paying for it this morning with a serious hangover. She’s also paying for it by having a terrible one-night-stand. She’s at the door, ready to leave but the sunlight is like needles in her eyes. She can’t find her sunglasses so she steals a pair on the counter and walks to the Volvo. Each step is like having concrete blocks for shoes and walking through quicksand. She finally reaches her car and has to dig for the keys. After all that work, her car doesn’t want to work…it won’t start. Watching through the front windshield, you get a good view of facial expressions and the fact that she isn’t wearing a bra. She struggles for a while before accepting the horrible fact that her car isn’t starting and she’s going to have to go back and ask ‘that guy’ for some help…ugh, she so wasn’t wanting to see him again.

One Response to Vika Hungover & Trying to Leave in the Volvo