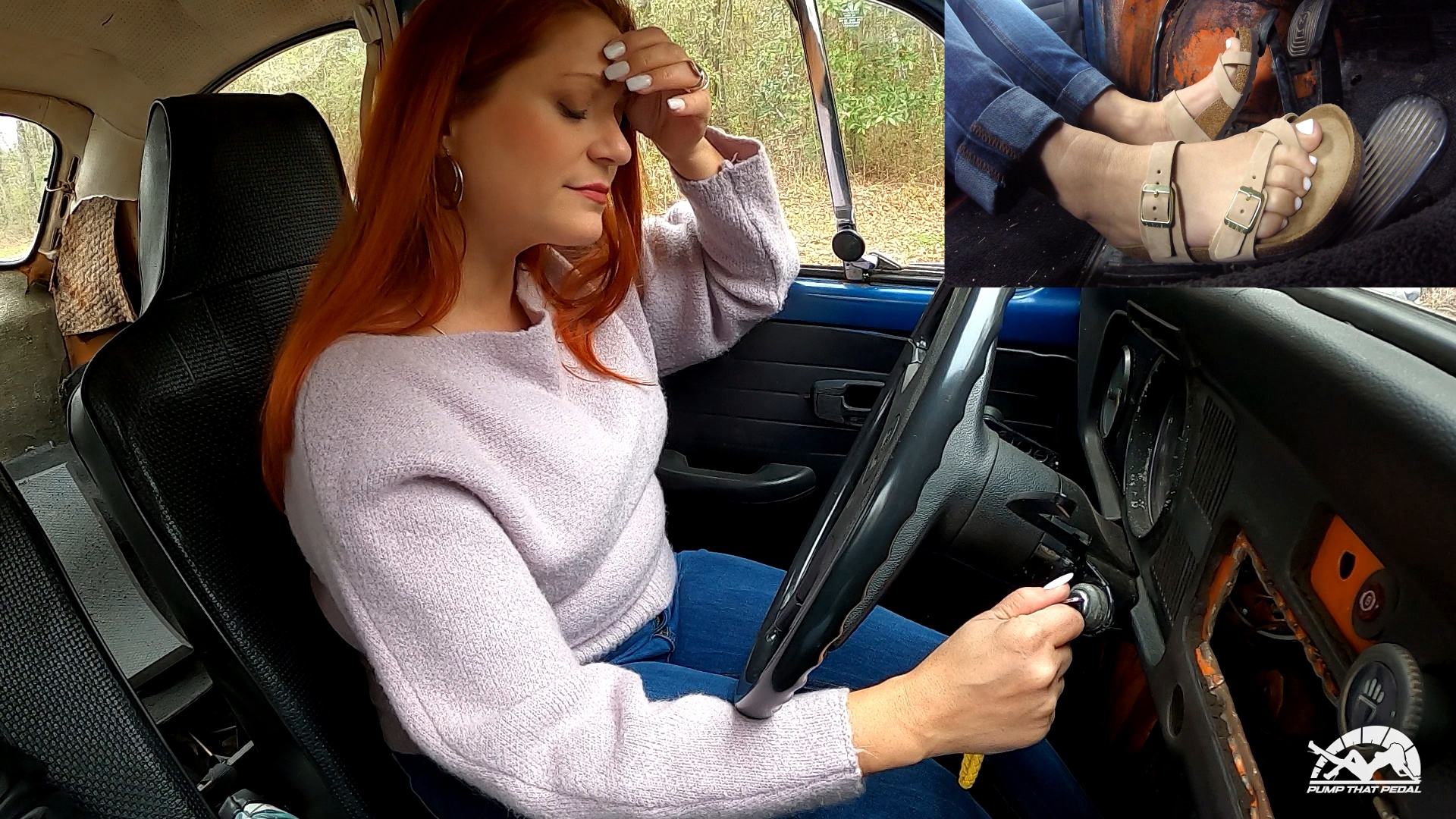 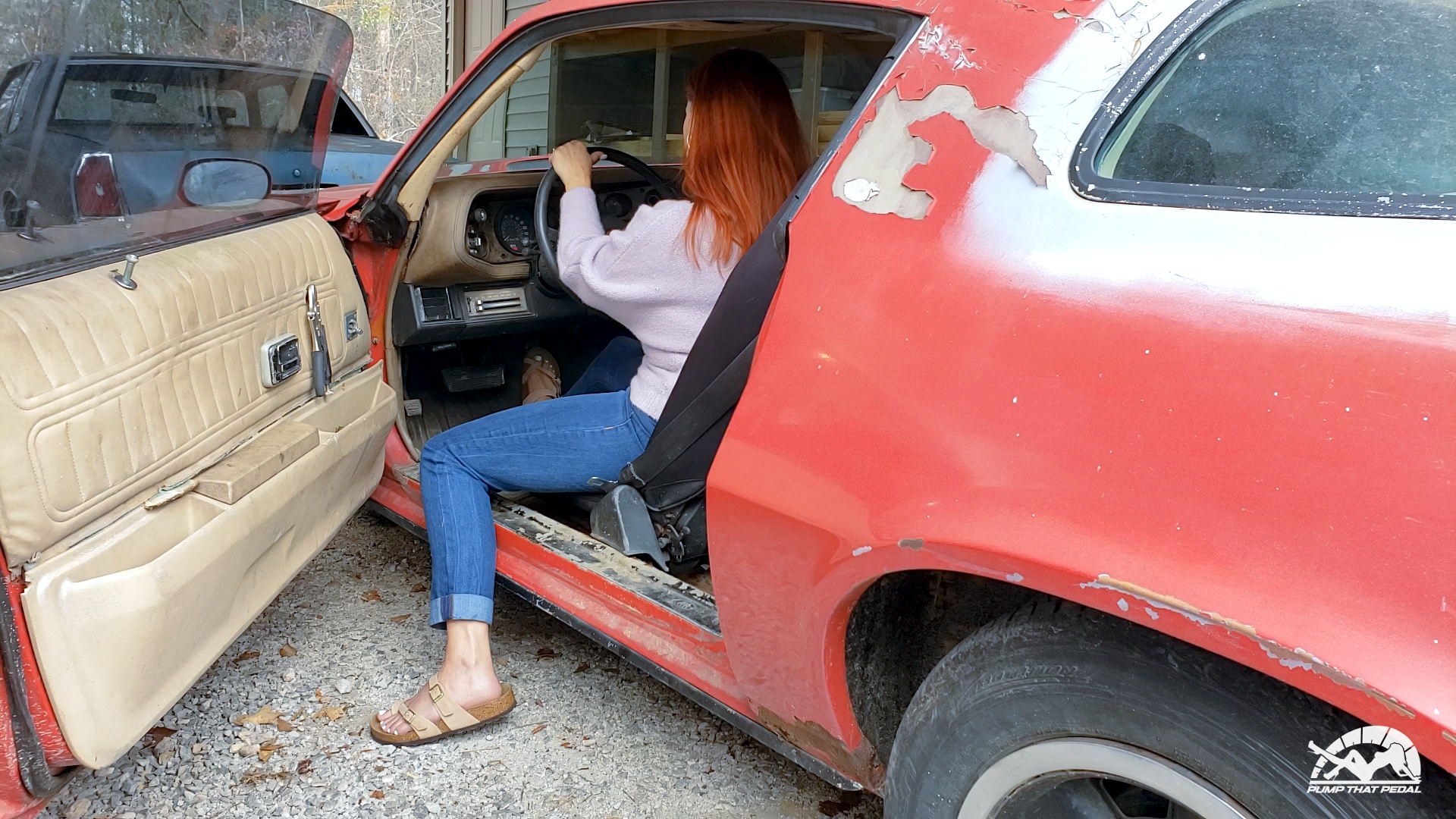 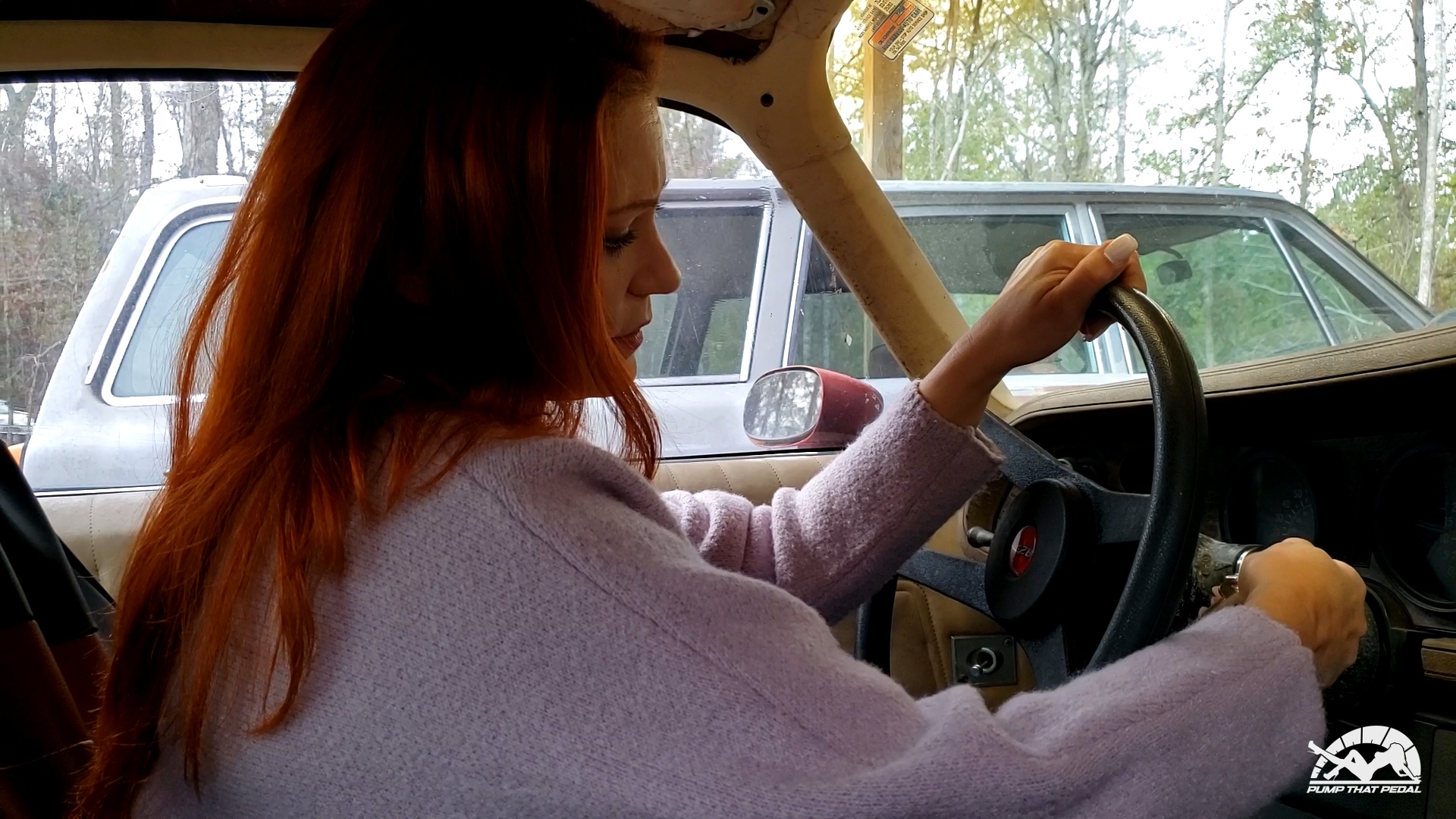 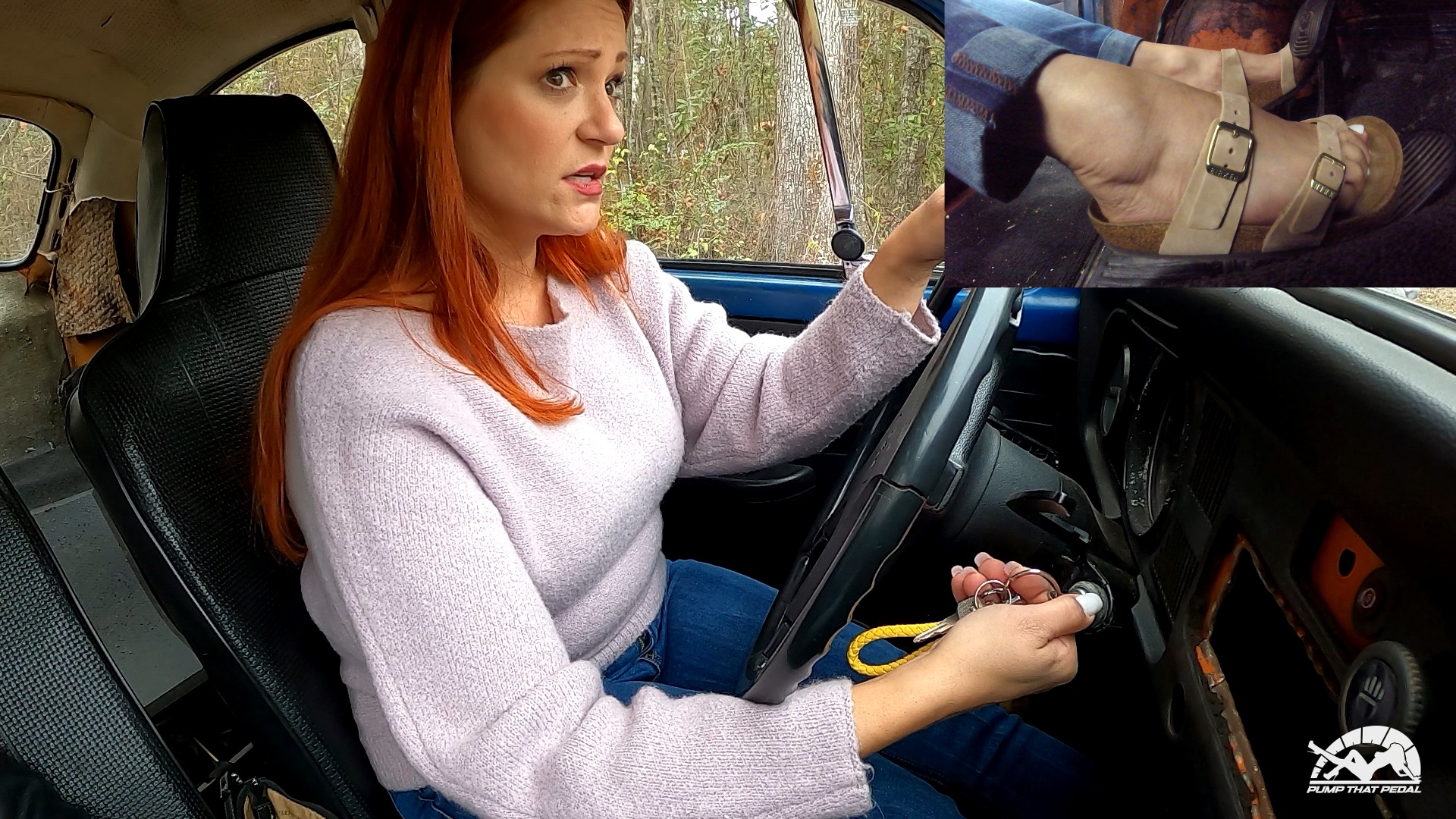 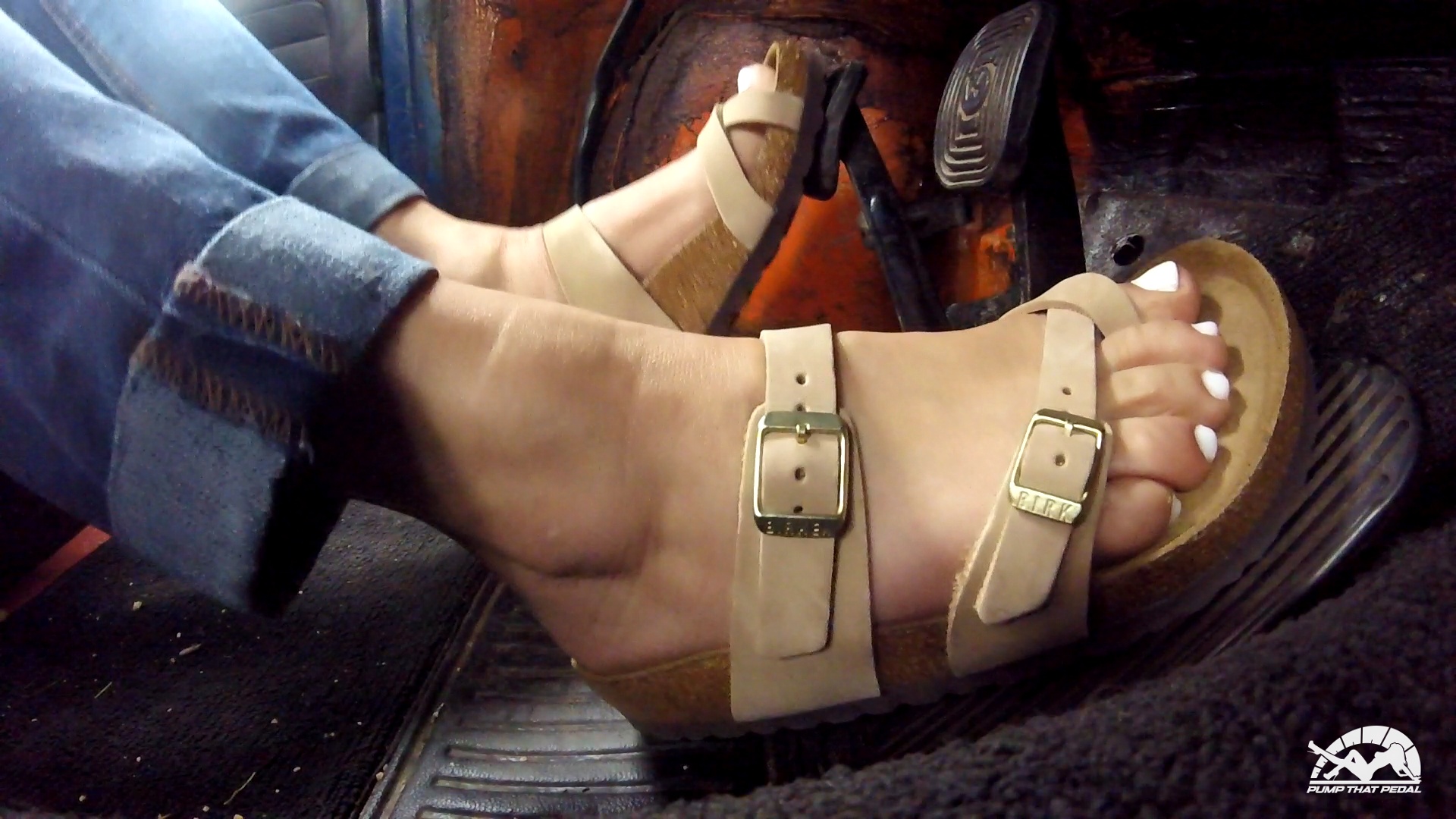 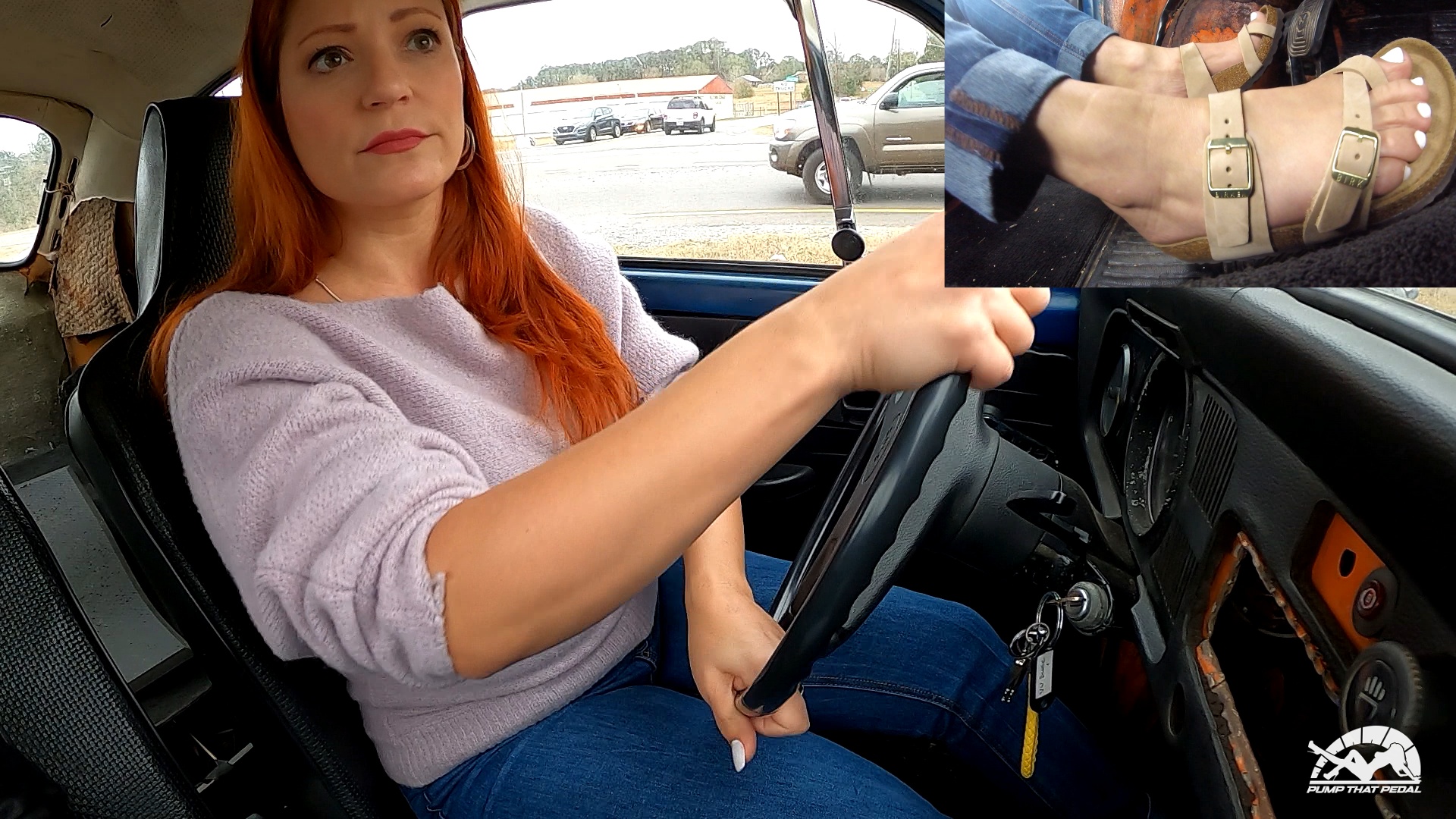 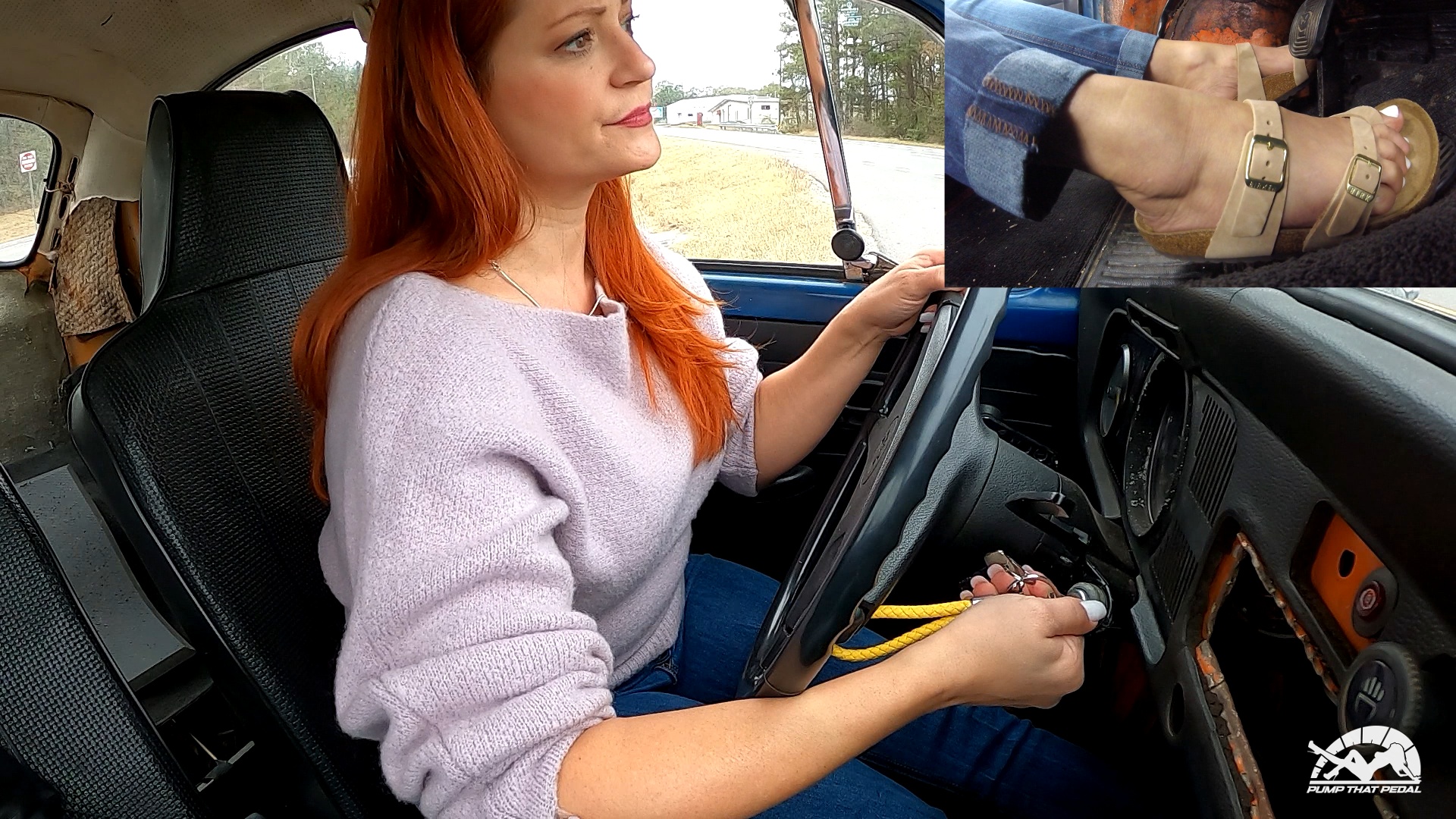 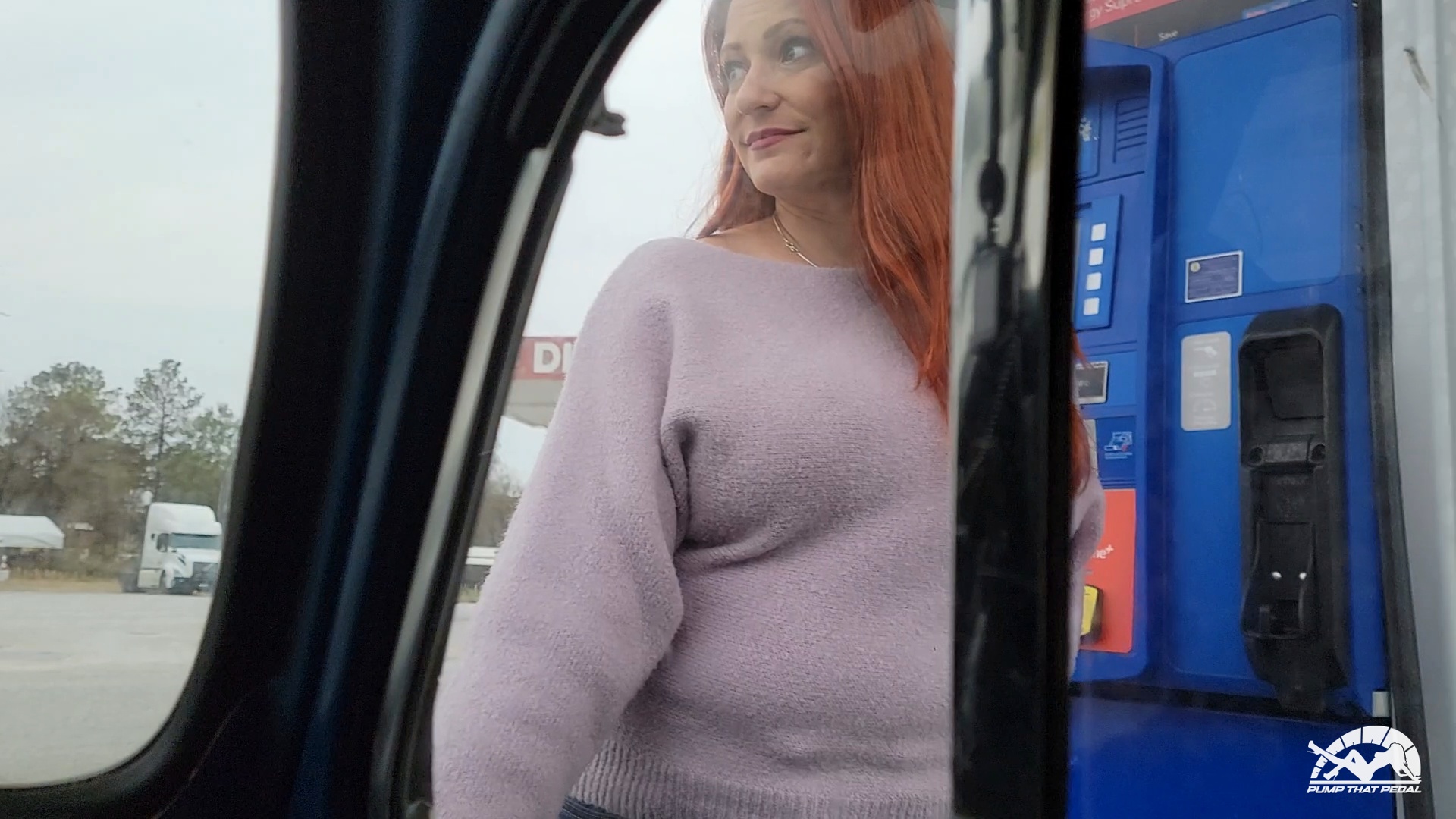 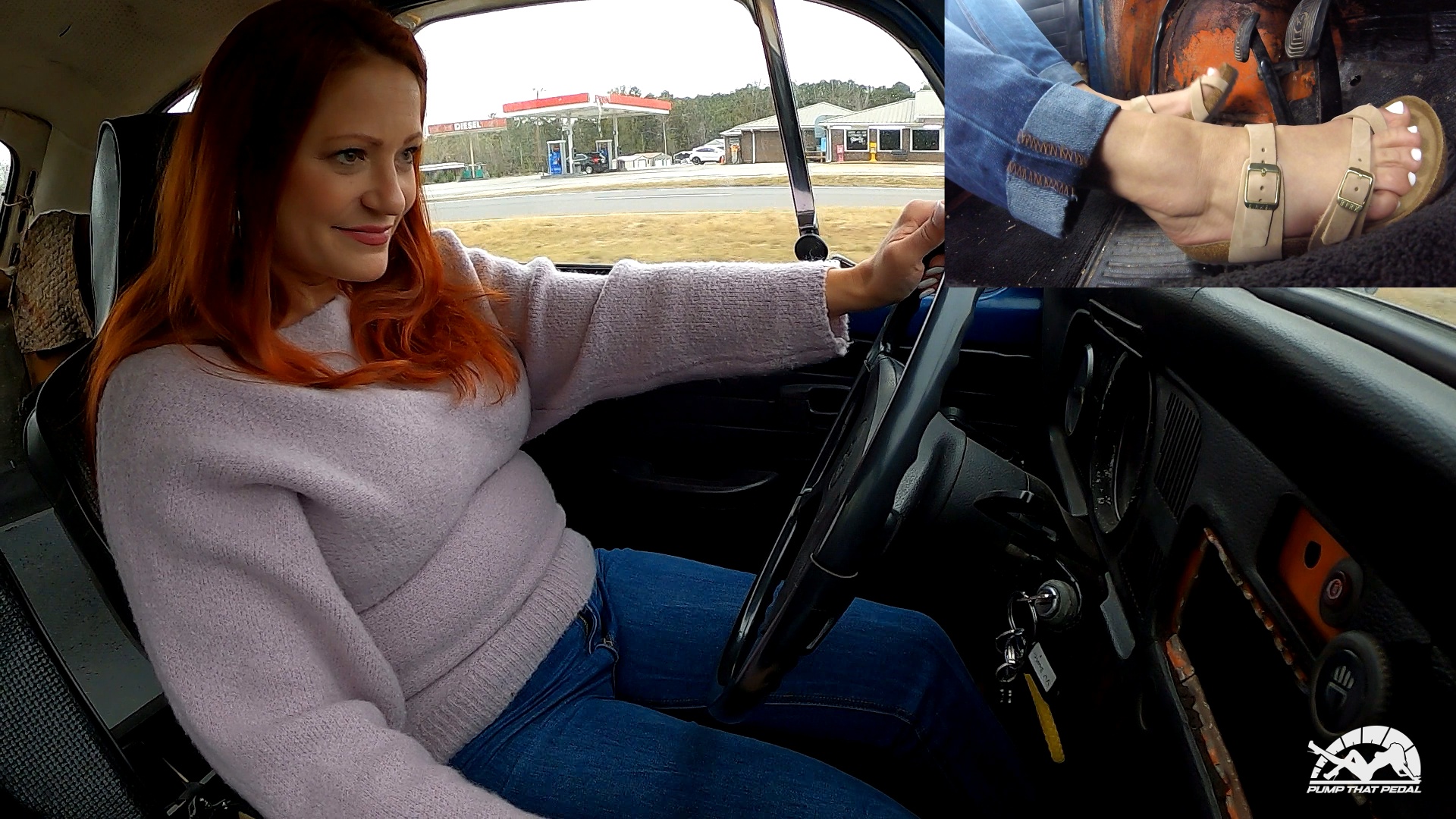 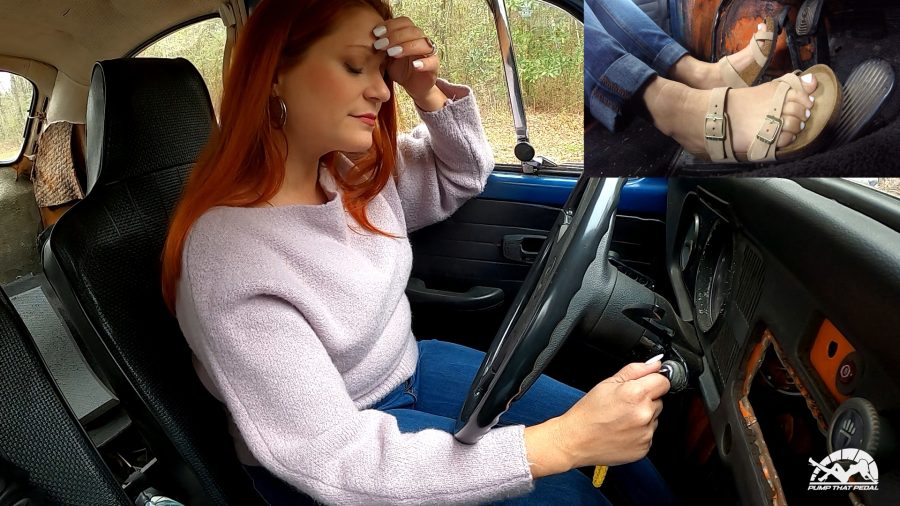 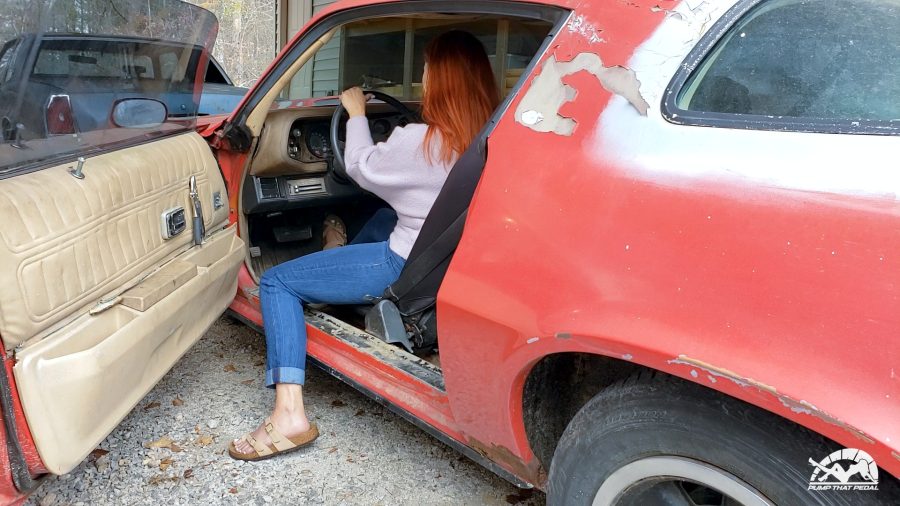 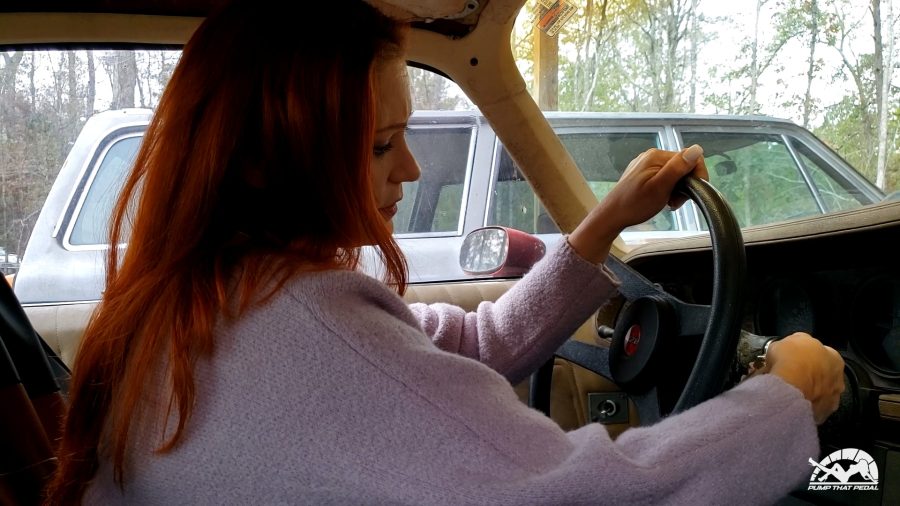 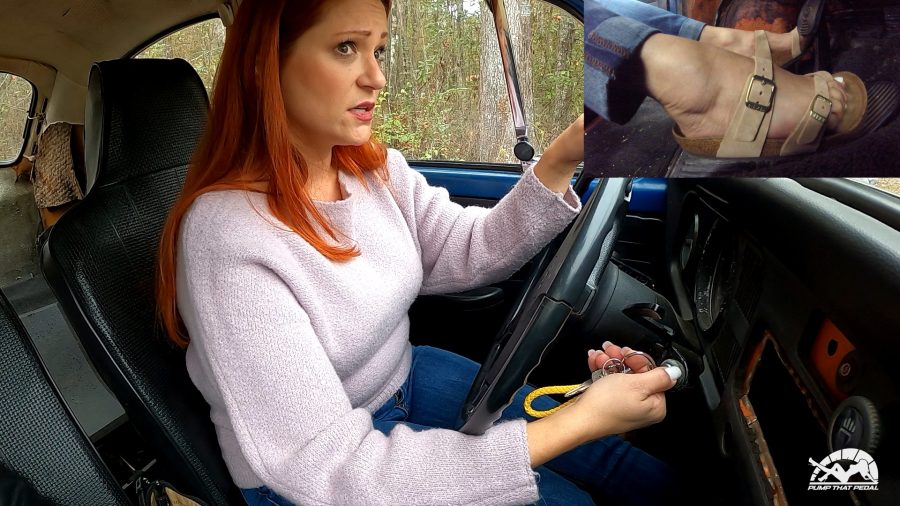 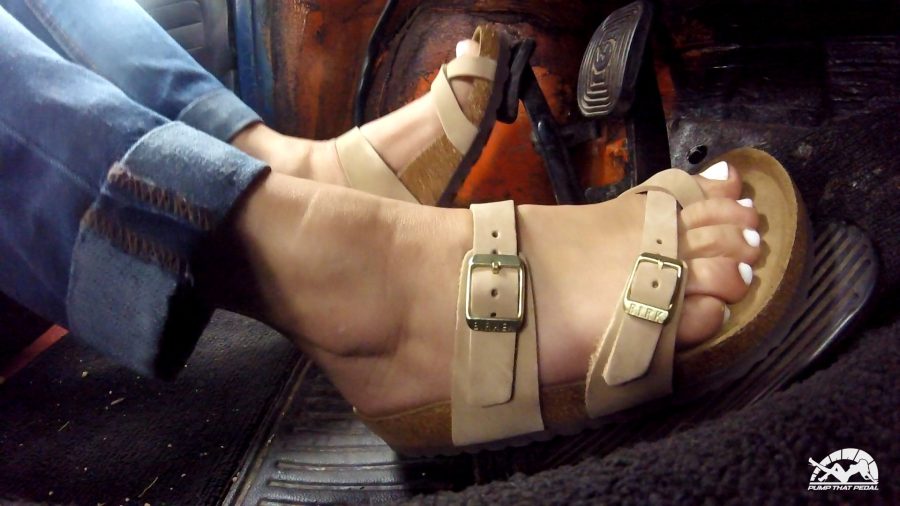 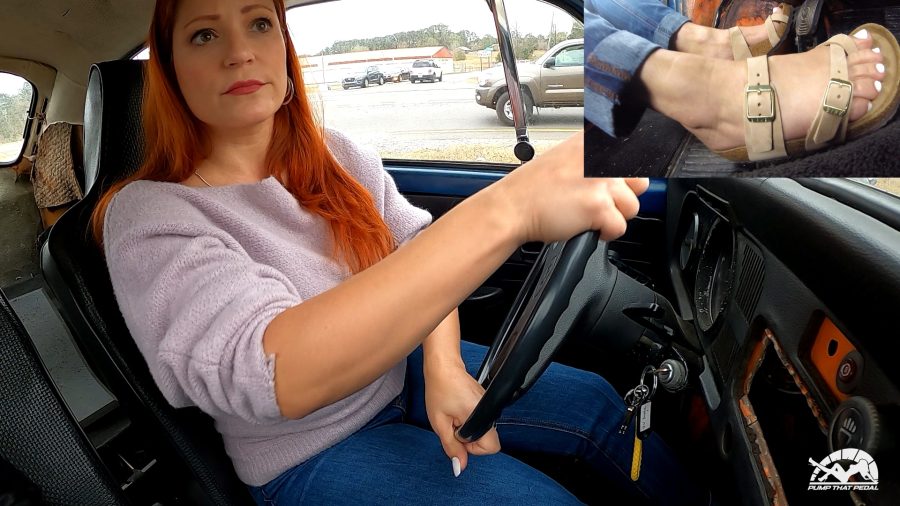 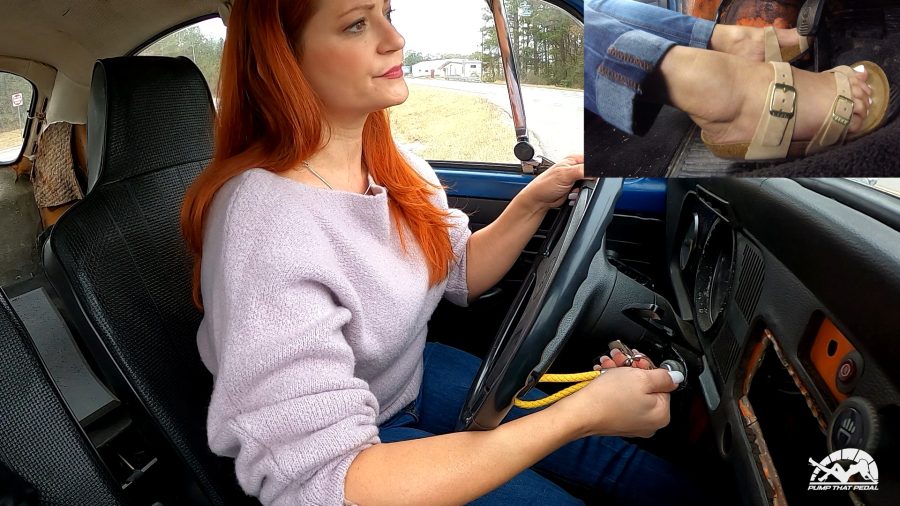 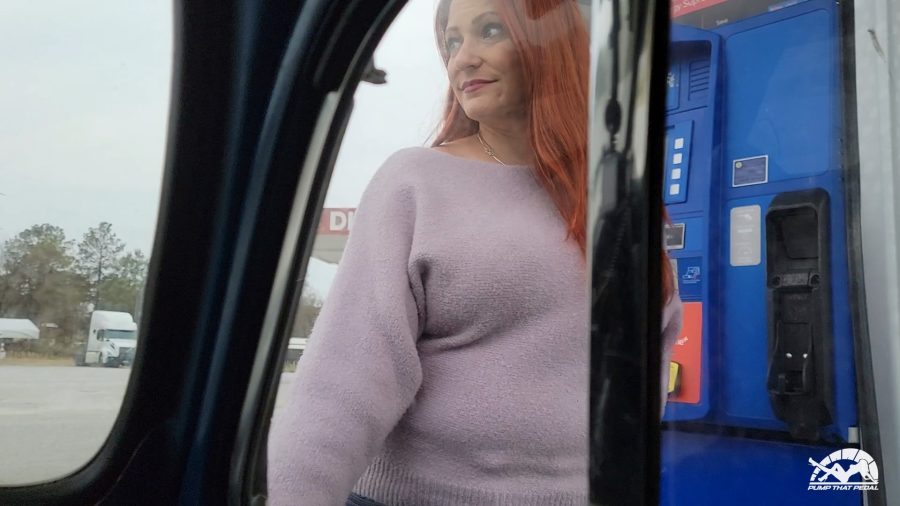 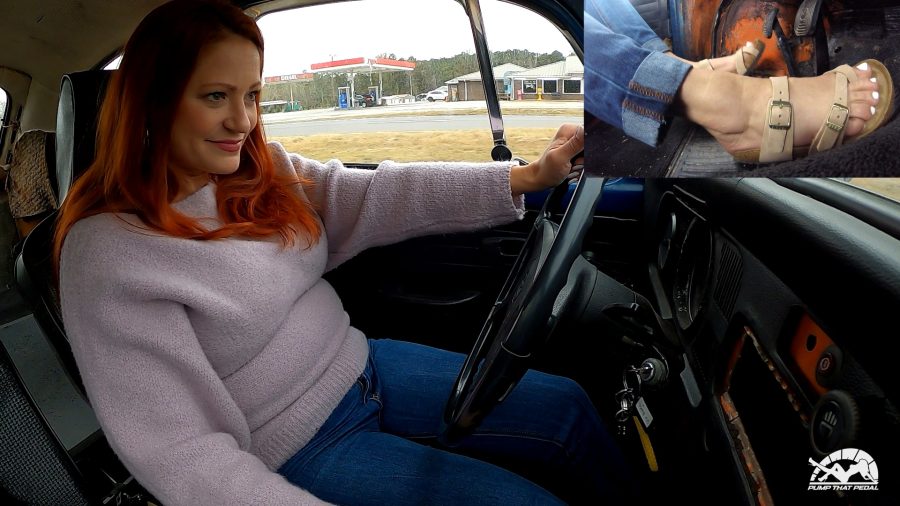 **Because of the file size of this video, be sure to use a good connection before downloading.**

Outfit & Shoes
Any long sleeve shirt or sweater would be fine with jeans and Birkenstock sandals being sent in.

Scenario
Vivian is your new stepmom who you’ve been getting to know. One day she asks if you’d be interested in going for a ride in some of the old cars they own, since she knows you are into older cars. Of course, you agree with a swiftness and can barely sleep with anticipation. You wake up to the sound of cranking, you immediately get ready and head down to go watch the show.

Filming starts with you watching her crank the Camaro from a creeper angle. The door is open, and her left leg is hanging out. She gets it to sputter and chug, but she can’t get it to catch. You see her leg bobbing up and down while she lightly bounces in the seat. It gets closer to starting, but still just teasing her. After a few minutes of creeping, you finally approach her open driver’s door, and she greets you with a “hey sleepy head, don’t get in just yet she’s being a pain”. She continues cranking as you watch from the driver’s side. More teasing from the Camaro, but she eventually gets it to fire up. She revs it up and tells you to get in. When you get in you and both close the doors, the Camaro dies. She goes back to cranking and pumping, the Camaro initially sputters, but turns into dry cranking. She admits she probably pumped it a bit too much. She lets it sit for a bit and then gives it another a try, still not starting. “Oh well, maybe we should try the bug? That’s a lot of fun to drive”. You can’t believe your ears, as if one episode wasn’t enough for the day.

Y’all get out and head to the bug. For this scene there should be a camera mounted on the front windshield getting Vivian’s upper body as the main view, while the passenger view is the corner view getting some great feet closeups. They enter the bug and a whole new struggle begins. Vivian cranks and pumps as the bug much like the Camaro is sputtering and chugging. She throws in a good mixture of pumping and holding it to the floor. After a good struggle, she finally gets it to fire up and gives it a decent revving, she celebrates. “Let’s go for a gas run, she’s almost empty”. She stalls it a couple of times while backing up but doesn’t take too much effort to get going again. She heads up the road and as she’s about to pull off onto the main road she stalls it. She struggles to get it started again as she is pumping it too much. After some time, she gets started and y’all finally head to the gas station. Vivian stretches out the bug’s legs as y’all head to the gas station with no trouble. Y’all fill up and it’s time to leave. The bug once again isn’t ready to leave. “C’mon I thought you were warmed up?” As she struggles, she finally says “I know you enjoy this, I saw you creeping this morning”. You don’t even try to deny it as she teases you a bit. It fires up and y’all head back home. She stalls a couple times heading back home, with some decent struggles. When y’all get home and are driving up the road she stalls it again and can’t get it started back up. She begs a bit more and bounces a good bit, teasing you some more as she knows you are enjoying it. “Don’t die on me here, we have just a few more feet”. After realizing she’s flooded it and it’s not going to start, she suggests maybe they come back out later to see if they can finally get it started and parked. Which I’m sure would be another adventure.