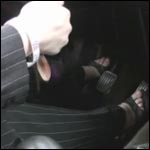 Brandizzle is dressed for a big day at the office but finds herself struggling with her old cars.  She tries to get the Coronet cranked and running but it’s proving unsuccessful.  She gets out of the Coronet and tries to take the Volvo but has starting issues with it as well.  She does manage to get ti running but now she’s stuck in the dirt.