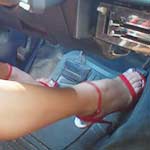 She quickly gets in her car and turns the key….it won’t start.  Damn!  She tries again but same thing.  She’s trying to get you both somewhere but the damn car won’t go anywhere!  She gets the car to start a few times but it stalls after a few feet.  Apparently you’re mesmerized by her struggling with the car and she catches you staring at her feet.  She realizes that you’re enjoying and, what the hell, she decides to give you something to look at!