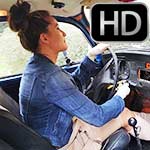 Jane just finished a cranking custom video in the old 1972 VW Super Beetle and now it’s time to try to fire it up and clear it out. During some customs the cars have to be tweaked to achieve the results of a custom script. Sometimes it’s simply having the model give the gas pedal a few pumps before turning the key and it floods out or sometimes, as in this case, it needed some mild rigging, so I popped off the coil wire. Now, with the car fixed, she tries to get it started but it’s really flooded. Yes, I do tell her to hold it to the floor after some attempts because we need to get it running and get it moved. She clears it out in good ole Jane Domino hard-revving fashion! 🙂

One thought on “Jane Domino Cranking & Revving After Custom 1082”