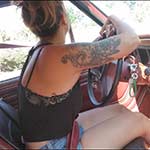 Jane Running Errands in the Loaner Jeep in Red Flats, 1 of 3

She’s borrowing the Jeep for a while and decides to take it out to run some errands. Not the best idea she’s had as it being temperamental today. It’s making her task of getting these errands done that much more difficult and frustrating. The Jeep keeps stalling on her and flooding out. Hopefully it doesn’t leave her stranded…

One thought on “Jane Running Errands in the Loaner Jeep in Red Flats, 1 of 3”