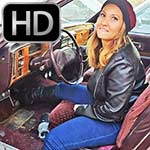 Jane Domino Jumping the Caddy with the Coronet Black Boots

This is one of those behind-the-scenes clips during the time when the Cadillac was being a pain in all of our asses! We got gas in the tank, new starter, new fuel pump and an eager Jane, ready to be the one who brings it to life! Except the Caddy still gave us the middle finger….