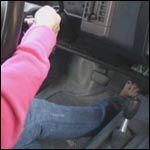 Karla starts out on the couch demonstrating what her routine in cranking the Blazer is.  She tries and tries to start her imaginary car but it doesn’t seem like she’s having much luck.  So, the demonstration is over and now it’s time for the real deal.  She gets in the Blazer and with lots of practice under her belt, she miraculously gets it to ……not start.   Lots of pleading from Karla during her futile attempts.