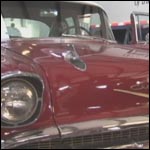 Kristen fires up this 1957 Chevy Bel Air and does some revving in it.  She had worked on it the week before and said that her and a friend were finally able to get it started and running.  Apparently it had sat for so long that it would just crank and crank and not start.  She gets in and doesn’t take but a second to fire it up and she gets the car rocking a little bit. 🙂