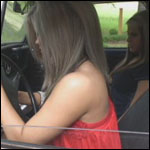 Miley and Riley are ready to leave and they both head out to the Bug.  Riley slips behind the wheel and is having issues with the key for a bit.  She manages to get the Bug started and running but it keeps dying.  She gives it some gas to help it along but it was probably too much as the Bug won’t crank now.  Miley gets out and heads to the engine to take a look at it, she thinks Riley pumped it too much and flooded it out.  Riley keeps trying to start it while Miley is inspecting the engine bay but now the battery is starting to drain.  Riley doesn’t give up too easily but in the end, it’s flooded too badly with a dead battery.