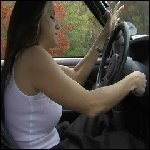 Pepper is off to the races in her husband’s drag Mustang.  She flips the master switch, hops in and it won’t start.  A friend calls her in the middle of it, and she’s short with her because she’s busy.  After the friend hangs up, she tries for a while before calling her husband about the issue, and he reminds her of the fuel pump switch she must turn on as well.  She flips the switches, tries again and the battery is drained before she can go.  It’s now raining, so she tells him nevermind!