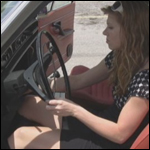 Most of you Volvo fans should remember back when we had some issues with major backfires while cranking it.  Well, it all started on this day filming Princess.  We had 2 customs to knock out and we made a short drive to a parking lot to film them.  Well, we got done and were ready to leave but the Volvo had other plans.  I called Scarlet to come pick us up but had her film a bit while I looked under the hood and Princess kept trying to work her magic.
The problem ended up being a shattered drive gear for the distributor.
Download
Leave a Comment