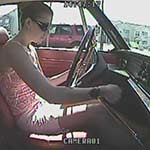 Princess Has Issues with the Volvo

This video was shot many moons ago.  Princess showed up for our shoot and I wanted to film her doing a driving video in the outfit she had on.  We get in the Volvo and she kills the first battery in about a minute and a half.  The second battery takes a few good attempts before the Volvo fires up.  She backs out of the garage and as she tries going forward, she could feel something was wrong with the car.  It had no power, kept stalling out and was flooded on each restart.  She drives around the parking lot to put the Volvo back in the garage but it takes her quite a few stalls and restarts before she gets there.
**NO feet shots in this clip!**

One thought on “Princess Has Issues with the Volvo”