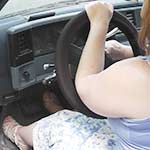 She’s meeting a friend at a great place in town today.  They have reservations since the place is usually very busy.  Scarlet is on the phone with her friend as she gets in her car and starts it up.  It doesn’t start up the first time so she tries again.  Nothing.  She tries again…nothing!  She keeps trying as she’s on the phone with her friend but she’s not getting anywhere.  Not to risk tearing the car up entirely, since it is not her car, she gives up and goes inside.

One thought on “Scarlet Can’t Make her Lunch Date”