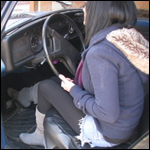 Star Works the Gas Pedal in the Bug

This was a fun video to film of Star.  It’s really cold and the Bug hasn’t been used in a few weeks, so I have her try to get it started for some revving.  The first attempt doesn’t last long as the battery is cold and weak.  She does manage to get the Bug to sputter but the battery dies before she can get it unflooded.  So, we hook up the battery charger and she tries it again…but she doesn’t know that I made it so the Bug wouldn’t start.  You see her really try to the point of wearing herself out!  So, to give her some hope, I put the bug back to ‘run mode’ and let her rev it up a bit.  This goes on for a bit until I finally just let her keep it running and do some revving.