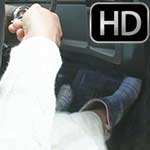 It’s a nasty nasty day out and it gets even nastier for Vassanta when her old car won’t start.  When it’s humid and wet outside, her piece of shit doesn’t want to start!  She pumps the gas pedal aggressively as she has a long battle with this old car in the rain…who wins?