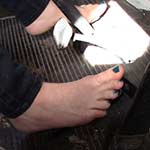 The bus just had another engine put in, so it needs some miles on it in a not-so-hard driving manner. So I thought I’d let Addie run up and down the street to get some seat time behind the wheel of it as well as some miles on the motor. I’m talking her through it as she was a bit nervous at driving a stick. She used to have a car that was stick, so she knows how but just isn’t proficient at it. She’s barefooted and her blueish nails can be seen as she works the pedals.