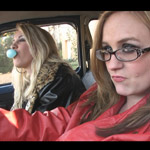 Addison & Rockell head to the old VW Bug to see if they have any luck getting it started.  Addison isn’t able to get it started so they swap places and Rockell gives it a try.  Rockell doesn’t have any luck either and so the girls swap again.  Addison finally gets the Bug to start and proceeds to rev the hell out of it.