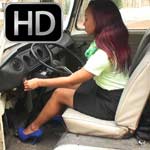 The Scenario:
“Alex Rayne is late for a presentation at work and is anxious and nervous about being late leaving.  She gets into the Bus from the driver’s side, makes herself comfortable in the seat. As Alex Rayne is making herself comfortable in the seat have her squish the seat way back by pushing herself in the back in the seat.(If possible switch the seen from the passenger side as she fist starts to pump and crank).  Have Alex Rayne pump the gas pedal slow/medium speed for a bit before cranking. Also hold in the clutch. Once she cranks it will not turn over, then pump the gas pedal for a bit and start cranking again.  Do the pumping before and after cranking throughout the video. Film the video from the passenger side then some from the driver side alternating scenes.  If possible make the engine sputter at times, start for a short period and have her rev the engine to warm it up then stall.  Keep doing the pumping before each crank and after. Have her hold in the clutch much of the video and from time to time let up on it as she is pumping and cranking, crank a few times without holding the clutch Still do the pumping between the cranks.  Take a few shots of her from the driver’s side holding in the clutch and letting up on it then holding it down as she pumps and cranks.  During the video have her show herself getting frustrated and anxious and at times squishing the seat back. Later in the video from the passenger’s side have Alex Rayne just pump the Gas pedal only without cranking for about twenty seconds at slow/medium speed and then crank.   At the end have her get out and slam the door being upset and calling work that her car will not start. “

One Response to Alex Rayne Cranking the VW Bus – #297