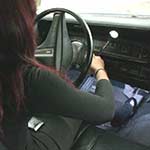 Alex Rayne is monitoring Saturday detention at her school and is ready to go home.  She heads to her old Coronet while talking to a friend that she’s going to be meeting soon.  She finishes her conversation, slides in behind the wheel and has trouble getting her car to start.  She tries different techniques, even sliding her shoes off to get a better feel for the gas pedal but nothing is working!  The battery is getting weak and she finally gives up to call AAA for help.