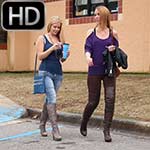 They’re leaving the school later than everyone else, so the parking lot is empty as they walk to the car. Cassandra tries getting it started but it’s chilly out and this old Chevy is cranky in cold weather. Various angles capture her trying to start the car for most of this clip. Anabelle offers assistance by turning the key while Cassandra pumps it but that doesn’t help much. Anabelle finally gets Cassandra to move so she can give it a try. She’s got her coffee mug in her left hand while she turns the key with the right and pumps the gas with her gray’ish colored boots. She’s not doing any better and thinks it’s because the way she’s sitting, so she adjusts because that’s exactly what the car needs. lol

One thought on “Anabelle Pync & Cassandra Stranded at School, 1 of 2”