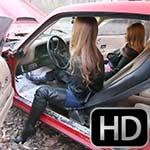 2 girls is what you mostly see in clips but today, we got 3 of them in on the action as you view it from Scarlet’s camera.  This first clip is a lot of cold start, flooded cranking of both of the Chevy’s with a lot of revving mixed in.
Cassandra & Anabelle try getting the Monte Carlo started with Scarlet filming in the backseat.  Doesn’t take too much coaxing, so they move on to the Camaro…which has a dead ass battery!  We hook the Jeep to the Camaro to jump it off as Anabelle gets back behind the wheel and begins the struggle!  The Camaro sounds like it’s out of gas or something, very strange the way it’s behaving with it wanting to start…fuel pump issue?  After a while, Cassandra gets behind the wheel and works her magic and gets it started, with a little help from Kimber behind the wheel of the Jeep giving it some go-juice!  The girls end up getting into a revving face-off while I’m cringing, waiting for one of the engines to blow!