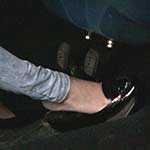 She hops behind the wheel of the 1972 VW Super Beetle wearing a blue long sleeve top, tight acid washed skinny jeans and black patent loafers. It takes her a few minutes to get the car fired up and she revs it to clear it out and warm it up in her loafers before kicking them off and finishing out the revving with her bare feet.