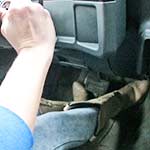 Anabelle Pync Cranks & Drives the Monte in Jeans & Boots, 1 of 2

It takes her a while to get the Monte Carlo started. Lots of sputtering, stalling and teasing from the car while she’s pumping in her hold cowgirl boots and tight acid-washed jeans. Just when she think she has it going the car conks out on her. When she finally gets the engine cleared out and running, she hits that gas pedal and takes you for a drive.

One thought on “Anabelle Pync Cranks & Drives the Monte in Jeans & Boots, 1 of 2”