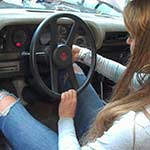 This girl barely fits in the Camaro. With the seat all the way back, her knees are still all up in the dash. She struggles with the old Camaro to get it started. Her white, size 10 Keds show up well in the footwell as it’s overcast today. She keeps at it and gets the Camaro started and revs it up to clear it out so she can take it for a spin. Of course, her confidence in the car is lacking and when it stalls while heading down the driveway, her confidence fades entirely.