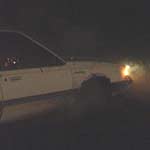 Oops!  Looks like she messed the car up pretty good on this night…