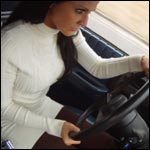 Asia Driving the Blazer, 2 of 2

Asia takes the Blazer through town to run errands.  However, we run into heavy traffic and she gets a bit frustrated.