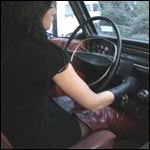 Asia has her hands full and feet in full swing during this clip.  She has to battle with starting the Volvo and keeping it running while trying to back it up out of it’s parking spot.  The ground is a bit damp and covered in pine straw, so it’s pretty slick and makes the wheels spin, giving that nice reversing whine sound.  She has to talk to herself to keep her composure as the car stalls often.  This girl can work a stick nicely but can she finesse it enough to get keep the Volvo running long enough to get it unstuck?