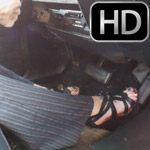 Aubrey has to get to work but her car won’t start!  She smokes a cigarette to calm her nerves and even pops the hood to see if she tell what is wrong with it.  Frustrated, she keeps trying but she eventually has to call for a ride to work.