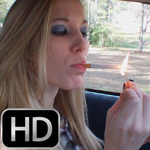 In this custom, you’re along for a ride in the Monte Carlo with Aubrey.  She’s pissed and in a hurry.  She lights up a cigarette and takes off!  She goes speeding through the backroads, punching the gas when she can but the slow ass folks on the road are making it difficult.  She finally gets tired of you being in the car with her and kicks you out on the side of the street and leaves you in the dust.